Advocating against child Labour in mining

There was strong commitment from the district probation officer and the district labour officer to continuously support the taskforce members. Throughout this exercise these officers were fully involved

Our continuous sensitization and awareness in the mining communities specifically back to school campaign and awareness meetings done by ECO and the taskforce members of Rupa resulted into 13 children (12 females and 1 male) mapped previously in August 2016 joining school this February. Of these    children 8 of them were not school going and 5 were school drop outs.

On 24th march 2017 the Inspection team  composed of the District Labour Officer, District Probation Officer and the Parish Chiefs of the respective sub-counties of Rupa, Katekikile and staff ECO staff conducted an inspection  visit in the sub counties of Rupa and Katekikile  to ascertain the status of children in the Mining sites ,assess level of Child Protection Committee participation in the communities and what   impact their being bears to the community and Identify what child protection issues exist in these sub counties and mining areas that may need to be addressed. The team generated findings on lack of nearby schools for children in mining communities and issues of child neglect. These issues are currently being reviewed at Moroto DLG

Commitment by the district and local leaders to fight child labour

A training on roles and responsibilities for district stakeholders and local leaders took place on February 28th 2017 at Rapona hotel in Moroto and was attended by around 20 participants including ECO staff. The training focused on understanding the concept of child labour, the national and international legal framework on child labour, rights of a child, roles and responsibilities of different stakeholders who were in attendance in stopping child labour.
These roles encompassed the following stakeholders (Roles of the central government, local governments, local councils, employers and their organizations, workers and their organization /Labour unions, NGOs, local communities and local leaders

At the end of this training there was commitment from all the district stakeholders in attendance like the head of police family and child protection unit, CDO, DEO, Probation officer, district labour officer, teachers to stop child labour through creating awareness, monitoring and reporting cases of child labour in their communities. The police Child Protection Unit also committed to arrest and gather evidence on the perpetrators
The district officials, sub county officials also committed to push for bye laws on child labour in the district 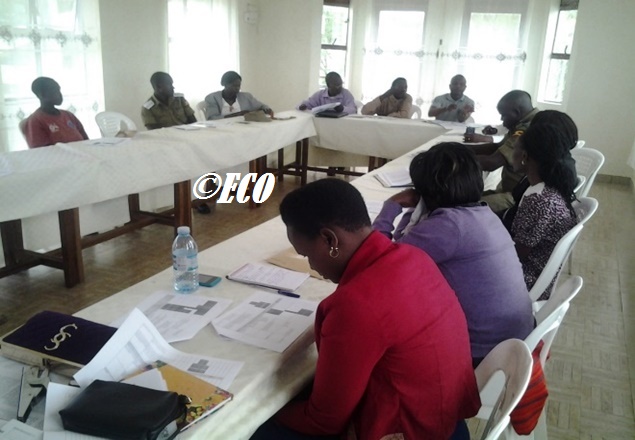 Across section of participants during the training on roles and responsibilities of stakeholders on child Labour in Moroto at Rapona hotel. 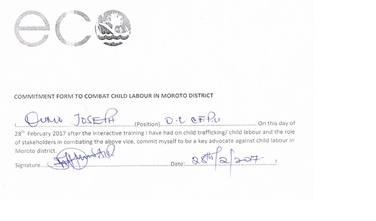 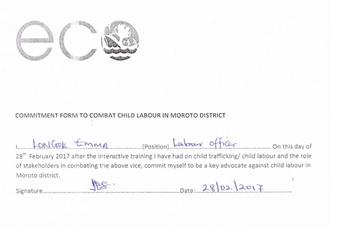